I am a PhD Candidate at the University of Pennsylvania in Political Science, specializing in International Relations with a secondary concentration in American Politics.

My research focuses on international organizations, diplomacy, and climate politics. In particular, I examine agenda-setting in IOs: which states control IOs’ agendas? How do different actors maximize their agenda-setting power? And through what pathways do critical issues like climate change reach the agendas of IOs and of other political bodies? Across these themes, I broadly focus on the political dynamics of the policymaking process, and especially which actors and strategies are most influential. To address these questions, I employ a diverse methodological toolkit, including text analysis, experiments, statistical methods, and elite interviews.

My dissertation examines why some small states—like Ireland, Costa Rica, and Liechtenstein—are effective at shaping the United Nations (UN) agenda, even in the face of powerful states’ opposition. I argue that while material power is important in explaining some of IO politics, individual diplomats play a crucial role as well. States can influence the early stages of policymaking—when agendas are set and coalitions are built—with diplomatic capital, a form of social power developed through skilled representation. Diplomatic capital can be actively pursued, or can be an unintended consequence of resource constraints, which limit diplomatic rotation. Just as individual effectiveness matters in domestic legislatures, diplomat effectiveness matters in IOs. By cultivating diplomatic capital, small states can be more influential than their size would suggest. I argue that by focusing on the late stages of policymaking—particularly voting on final resolutions—previous studies have overestimated the influence of powerful states. However, in the early stages of policymaking, it is harder to leverage economic and military resources because in these less public contexts, target state compliance cannot be as readily monitored. These insights about the role of diplomacy, power, and agenda control challenge our understanding of the relative importance of power and diplomacy in IOs, and the extent to which small states influence international politics.

My research is published in the Journal of Politics and International Studies Quarterly. I have received generous research support from  the Kleinman Center for Energy Policy, the Social and Behavioral Science Initiative, and the Social and Cultural Evolution Working Group, among others.  You can also find my commentary in  the Washington Post.

Before coming to Penn, I worked in the private sector as a market research consultant, taught English in Malaysia as a Fulbright ETA, and obtained a Master’s Degree in Political Science from Columbia University, as well as a Bachelor’s Degree in Political Science and Philosophy from Rutgers University. I enjoy baking, podcasts, and baseball, and am training for my first marathon. 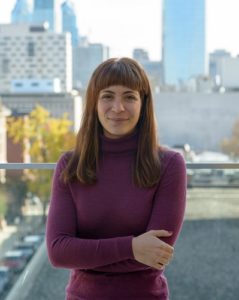